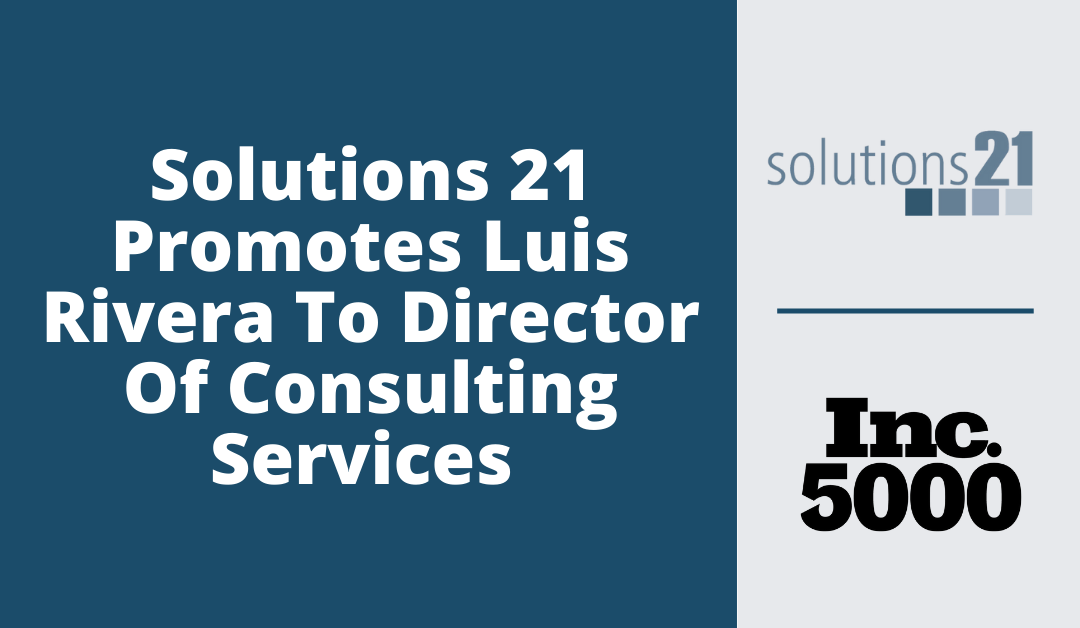 Solutions 21 – which deploys its elite team (physically and digitally) to mid-market firms across all industries to ensure they have the tools to strategically develop the next generation of leaders – is pleased to announce the promotion of Luis Rivera to Director of Consulting Services.

In his three-year tenure with the firm, the decorated U.S. Army combat veteran tackled the strategic initiative of creating Solutions 21’s certification process and has been a key mentor for coaches and consultants.

In addition to joining Solutions 21’s management team and supervising a team of direct reports, Rivera will continue to provide input on the firm’s ongoing strategic plan and its talent certification process.

“I first met Luis as a member of the first class I taught at the U.S. Army War College,” President Buddy Hobart said. “He’s been an outstanding practitioner of our leadership services, and I congratulate him on this well-deserved step.”

Rivera is a retired Army colonel whose passion for leadership and team-building was at the core of his responsibilities in both domestic posts and in foreign countries. He served in a variety of senior leadership positions, including field leadership of tactical units in combat, administrative leadership in the Army’s Human Resources Enterprise, and instructional leadership as coach at one of the Army’s premier combat training centers.

Rivera is a graduate of Wentworth Military Academy and West Texas A&M University with a bachelor of science in computer information systems. He holds a master’s degree in human relations from the University of Oklahoma and a master’s in strategic studies from the U.S. Army War College.

Solutions 21 deploys its elite team to mid-market firms across all industries to ensure they have the tools to strategically develop the next generation of leaders. Solutions 21 has offices in Pittsburgh, Pennsylvania; Nashville, Tennessee; Kansas City, Kansas; Jacksonville, Florida; and Phoenix, Arizona. Solutions 21 founder Buddy Hobart has authored six books, including the recently released The Leadership Decade: A Playbook for an Extraordinary Era.